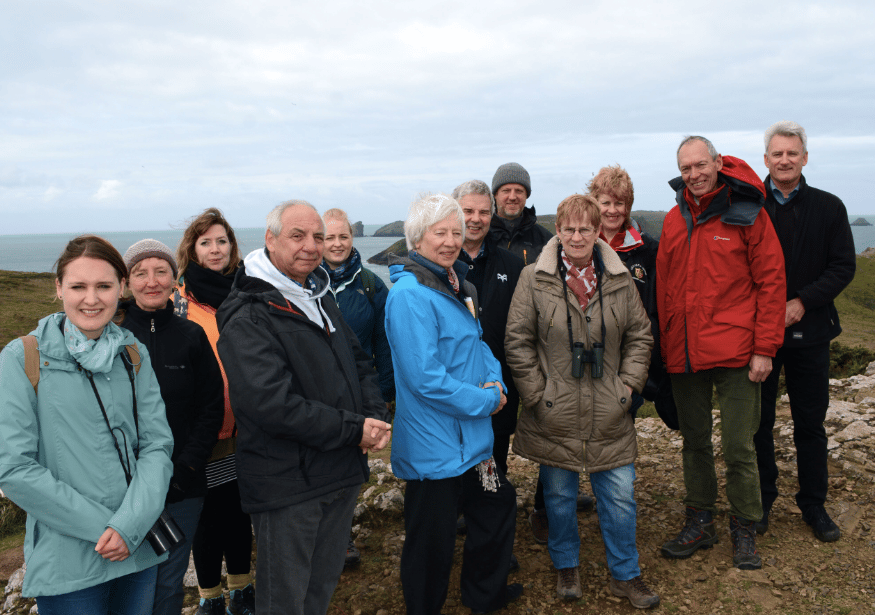 Environment charities are taking Assembly Members on a trip to show that we need to do more to protect our blue planet within Welsh seas. Our marine areas can often be ‘out of sight, out of mind’, so in showing Welsh politicians one of Wales’ most precious areas for marine wildlife, Wales Environment Link (WEL) hopes to highlight the urgent action needed and the benefits that can be gained by effective management. The trip will demonstrate what the local challenges and solutions are to better manage marine protected sites for nature.

Wales Environment Link’s Marine Working Group, an alliance of conservation charities which speaks up for the protection of Welsh seas, has today (2nd May) taken members of National Assembly for Wales’ Climate Change, Environment and Rural Affairs Committee to Skomer Marine Conservation Zone to demonstrate the need for more ambition and leadership to recover and protect our seas. The Marine Working Group provides a strong and independent marine voice in Wales and are concerned at the lack of improvement and action.

The visit coincides with the Committee’s follow up work on how Welsh Government and other Management Authorities protect and manage sites in Welsh seas called Marine Protected Areas (MPAs). The Committee’s  inquiry report in 2017, ‘Turning the Tide’ into the management of Wales’ Marine Protected Area’s found significant challenges and called for the Welsh Government to give greater political priority, leadership and funding to enable action nationally and locally. Two years on, WEL’s Marine Working Group is concerned the Committee’s calls have not translated into improvements for Wales’ important marine wildlife and habitats.

Effective management of MPAs is critical to safeguarding marine wildlife and helping to support those industries and jobs that rely on the Welsh coast and sea. Welsh seas make up over half the area of Wales. Uniquely situated where warmer waters from the South meet colder, nutrient-rich waters from the North, the sea around Wales is special in many ways. They support internationally important populations of seals and dolphins, and the many cliffs and islands along the coastline are home to globally important seabird colonies, including the famous puffin on Skomer Island. Several giants of the underwater world can be found passing through Welsh waters, including the world’s second largest fish the basking shark and huge leatherback turtles. Hidden beneath the waves are landscapes every bit as varied as those found above water with undersea cliffs, caves, plains and dunes. An extraordinary range of habitats such as colourful reefs and seagrass meadows provide sanctuary to thousands of plants and animals.

Marine Protected Areas are used to help conserve important habitats and species. Each is designed to protect species and habitats by managing human activities that that occur within the site. Wales currently has 139 such sites. The condition of the features within the MPA is the litmus test to determine if management is effective. As shown by the Welsh Government in their report to the National Assembly for Wales in January 2019: in Wales’ inshore Special Areas of Conservation (SACs) and Special Protected Areas (SPAs), 45% of features are in unfavourable condition and 9% of features are in an unknown condition, due to insufficient information.

The area around Skomer Island is one of Wales’ longest standing Marine Protected Areas in Wales and is considered the ‘jewel in the Welsh marine biodiversity crown’. The site was initially one of only three Marine Nature Reserves in the UK. Following new powers under the Marine and Coastal Access Act 2009, the area around Skomer Island and the Marloes Peninsula in Pembrokeshire, South West Wales, was designated by Welsh Ministers as a Marine Conservation Zone in 2014. The site is managed by Natural Resources Wales who undertake a range of site management activities, monitoring and research.

Gill Bell, Marine Conservation Society, said: “We are pleased that the National Assembly for Wales has revisited its 2017 inquiry to see what progress has been made. Whilst we feel there has been some improvement in terms of policy and strategy, this needs to be translated to on the ground action. Effective management of Welsh Marine Protected Areas is needed to secure the long-term survival of some of our most treasured yet vulnerable marine wildlife both below and above the water. This work needs Welsh Government leadership and ambition. Sites like Skomer Marine Conservation Zone bring to life the issues we often talk about in Committee rooms in Cardiff Bay and remind us why Welsh seas are special and need protecting. Commitments on paper urgently need to be translated into action for marine nature conservation”.

Rachel Sharp, Chief Executive Officer, Wildlife Trusts Wales, said: “Skomer Island is recognised as an internationally important seabird breeding area and is home to significant populations of Puffins, Kittiwakes, and together with the neighbouring island of Skokholm, over half the world population of Manx Shearwaters.  Skomer is owned by Natural Resources Wales and managed by the Wildlife Trust of South and West Wales, who work with partners to monitor seabird populations on the island. Whilst some bird numbers are stable or increasing, other are showing signs of decline. In particular, Kittiwakes numbers are falling and further research is needed to find out why. We need to know if climate change is affecting the availability of food and how predicted increases in storms will affect populations. We hope that research will assist Welsh Government in protecting important feeding areas and investing to increase the resilience of present populations.”

Emily Williams, RSPB Cymru said: “It has been great to be able to discuss marine protection with Assembly Members in such a fantastic location. We know that protecting special areas for nature can work, and can also benefit people whose jobs and wellbeing rely on a healthy and clean marine environment. Welsh Government and other management authorities need to manage these sites to ensure that many of the species and places we know and love are there for our children to enjoy as well”.