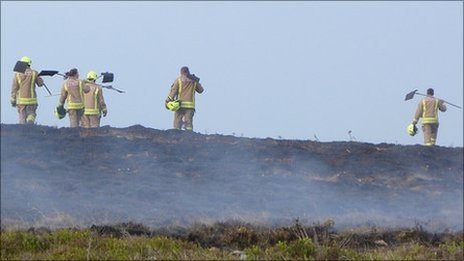 Nearly 1,500 wildfires were started deliberately in mid and west Wales in the past year, figures obtained by Joyce Watson AM reveal.

Figures from the Mid and West Wales Fire and Rescue Service show that between April 2010 and April 2011, fire brigades attended 1889 wildfires, of which 454 were accidental and 1435 – 76 per cent – were started deliberately.

Following a spate of high-profile wildfires in the region, the Labour Assembly Member for Mid and West Wales used Freedom of Information legislation to investigate the extent of the problem.

“There have been numerous dangerous and damaging wildfires in the region this summer, including several in Pembrokeshire and a particularly devastating blaze in the Brecon Beacons National Park, but I was shocked to discover how many fires have been started deliberately.

“Wildfires not only put human and animal lives at risk, causing huge damage, cost and inconvenience, they also divert our emergency services from other incidents.”

Mrs Watson said not all fires recorded as deliberate attended by fire brigades are later classified by the police as arson. Under the Criminal Damage Act 1971, to record an incident as arson the police have to prove that persons behaved ‘recklessly’ or ‘intended to damage property’, whereas the fire service only have to suspect ignition is deliberate, she explained.

Earlier this month firefighters tackled a blaze in Martins Haven, the latest in a series of gorse fires in Pembrokeshire after blazes in Goodwick and Solva. A 17-year-old youth has been charged in connection with the Solva fire, which happened in June.

These latest figures come on the back of a recent report on forest and grass fires in south Wales, which blamed bored youngsters for setting thousands of fires. According to the Forestry Commission report, ‘Wildfires in Wales’, published in May, the main reasons for starting wildfires are:

• Boredom
• Socio-economic factors
• Acts of rebellion or “as part of associated criminality”
• “For fun”
• As a method of land clearance
• Mental illness.

Mrs Watson said she is seeking an urgent meeting with Dyfed Powys Police Authority and Mid and West Wales Fire and Rescue Authority to discuss her findings and ways forward with this. She will also be writing to the five local authorities in mid and west Wales to find out what strategies they have in place.

She said: “The fire service and police have to work closely with councils and communities to change attitudes. Young people should be aware of the potential danger to others and themselves, and parents must play their roles too.

“It is disturbing that three quarters of these fires have been started deliberately, and I am determined to see action on this.”