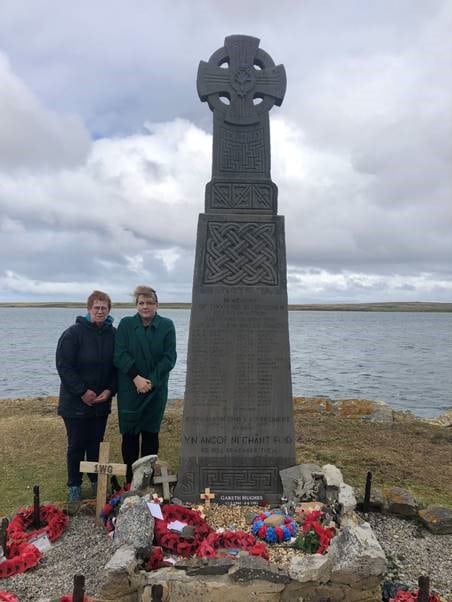 Assembly member Joyce Watson commemorated fallen members of the Welsh Guards, on a recent visit to the Falkland Islands.

The Labour politician, who has represented Wales and Britain at the Commonwealth Parliamentary Association (CPA) for a number of years, was invited to speak at a special Women’s Conference. She took time out to visit the Fitzroy memorial, which honours soldiers of the Welsh Guards and other units who were on board the RFA Sir Galahad and the RFA Sir Tristram, who were killed in the Argentine attack on 8 June 1982.

“It’s a huge honour – a poignant experience – to lay a wreath here, to remember those who died serving our country so far from home.”

The Mid and West Wales AM has previously spoken about her father’s experience as a prisoner of war. A farm worker from Llanbrynmair, mid Wales, William Roberts was called up to the Royal Welch Fusiliers in 1940. He was captured during the D-Day landings but eventually escaped. After the war he settled in Pembrokeshire, serving with the Royal Artillery in Manorbier.

Delegates from Cyprus, Gibraltar, Guernsey, Jersey, Malta, Scotland, St Helena, England and Wales attended last month’s (17 – 21 Feb) conference. Discussions ranged from sexual abuse to gender stereotypes in small communities. Joyce, who led the opposition on Pembrokeshire Council before being elected to the Senedd in 2007, gave the keynote speech on the topic of encouraging women to stand for public office.

Events are taking place around the world this week to mark Commonwealth Day (9 March), starting with yesterday’s annual service at Westminster Abbey, attended by the Queen.

CAPTION: Joyce Watson AM (Mid and West Wales) and Rhianon Passmore AM (Islwyn) laying a wreath at the Welsh Guards memorial. Fitzroy, Falklands