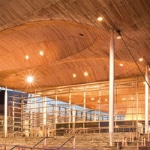 Senedd Member Joyce Watson has accused Brecon and Radnorshire MP Fay Jones of ‘incorrectly’ blaming the Welsh Government for putting the brakes on a major transport project near Ystradgynlais, Powys.

The Welsh Government has submitted to UK ministers plans for a Global Centre of Rail Excellence on the site of the decommissioned Nant Helen open cast mine.

Fay Jones MP has issued a statement claiming the Welsh transport minister, Ken Skates MS, was holding up the project. But in the Senedd yesterday (24 November) the Labour Senedd member for Mid and West Wales corrected the Conservative politician, explaining that the Welsh Government is in fact waiting for UK ministers to “give it the green light.”

“I would be pleased to have an update from the Minister for Economy, Transport and North Wales on the Global Centre of Rail Excellence in Wales. The GCRE is a fantastic opportunity for Powys and the upper Swansea valley that’s been brought forward by the Welsh Government.

“It would be really good to have some clarity on where things stand, particularly because the Conservative Member of Parliament for Brecon and Radnorshire has muddied the waters by incorrectly claiming that it is the Welsh Government that needs to give it the green light, whereas my understanding is that the hold-up is because the UK Government has not made a decision between the Powys site and the rival Siemens site in Scunthorpe.”

“In terms of the Global Centre of Rail Excellence, it was, of course, the Welsh Government that developed the innovative proposals for the Global Centre of Rail Excellence after identifying the need for such a facility, and we’ve shown the leadership that was required to bring it to this point. It’s very much a made-in-Wales initiative, creating the new facility for the entire UK rail industry, and we intend it to be an attraction for jobs, skills and growth in the area.

“The Welsh Government has collaborated with Powys and Neath Port Talbot councils, and a wide cross-section of the rail industry and academia, to bring forward this hugely exciting project. And the fact is the UK Government now needs to give the go ahead. So I would urge Ms Jones, rather than trying to claim credit for others’ work, to lobby her own government to deliver for her constituents.”